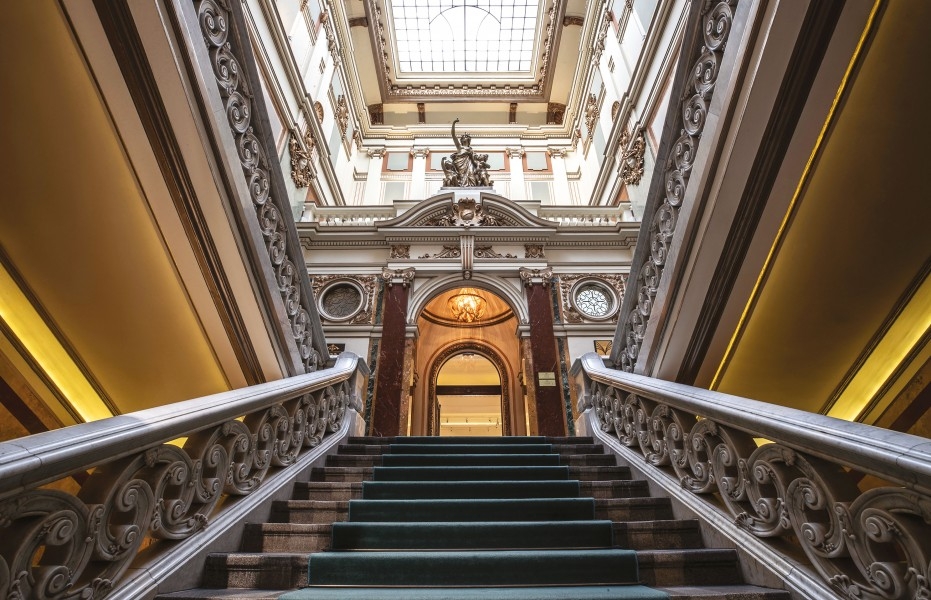 The saying goes that behind every door there is a story, but when you open the massive entrance door into the Belgrade Cooperative palace and find yourself facing imposing central staircase, overwhelmed by beauty and grandness, you simply wish that walls could speak. And if they could, they would be sure to provide enough material to make a TV series. Instead, the only thing we can do is listen to accounts of Belgrade’s Institute for the Protection of Cultural Monuments and our hosts from the Belgrade Waterfront. This will help us get a picture of one hundred years old history of one of Belgrade’s most beautiful buildings. 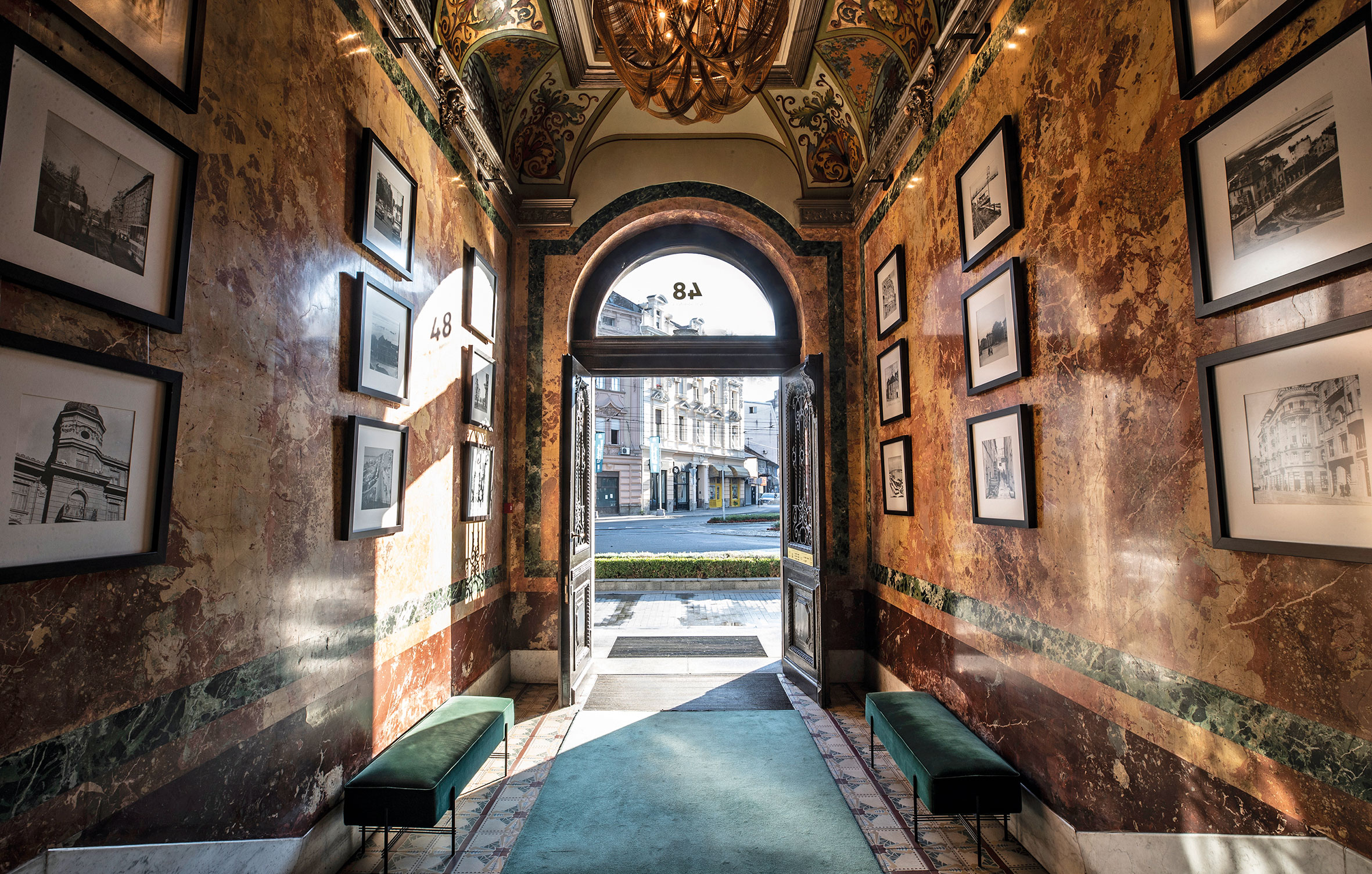 The Belgrade Cooperative palace is located on the Sava enbankment, at the crossroads of Travnička, Karađorđeva and Hercegovačka streets. It is the last one in the line of representative buildings erected in this area and in the vicinity of the river Sava. Due to its historical and urbanistic importance, the Belgrade Cooperative building was given the status of the Cultural Monument in 1966, followed by the status of a Cultural Heritage of Great Importance in 1979. 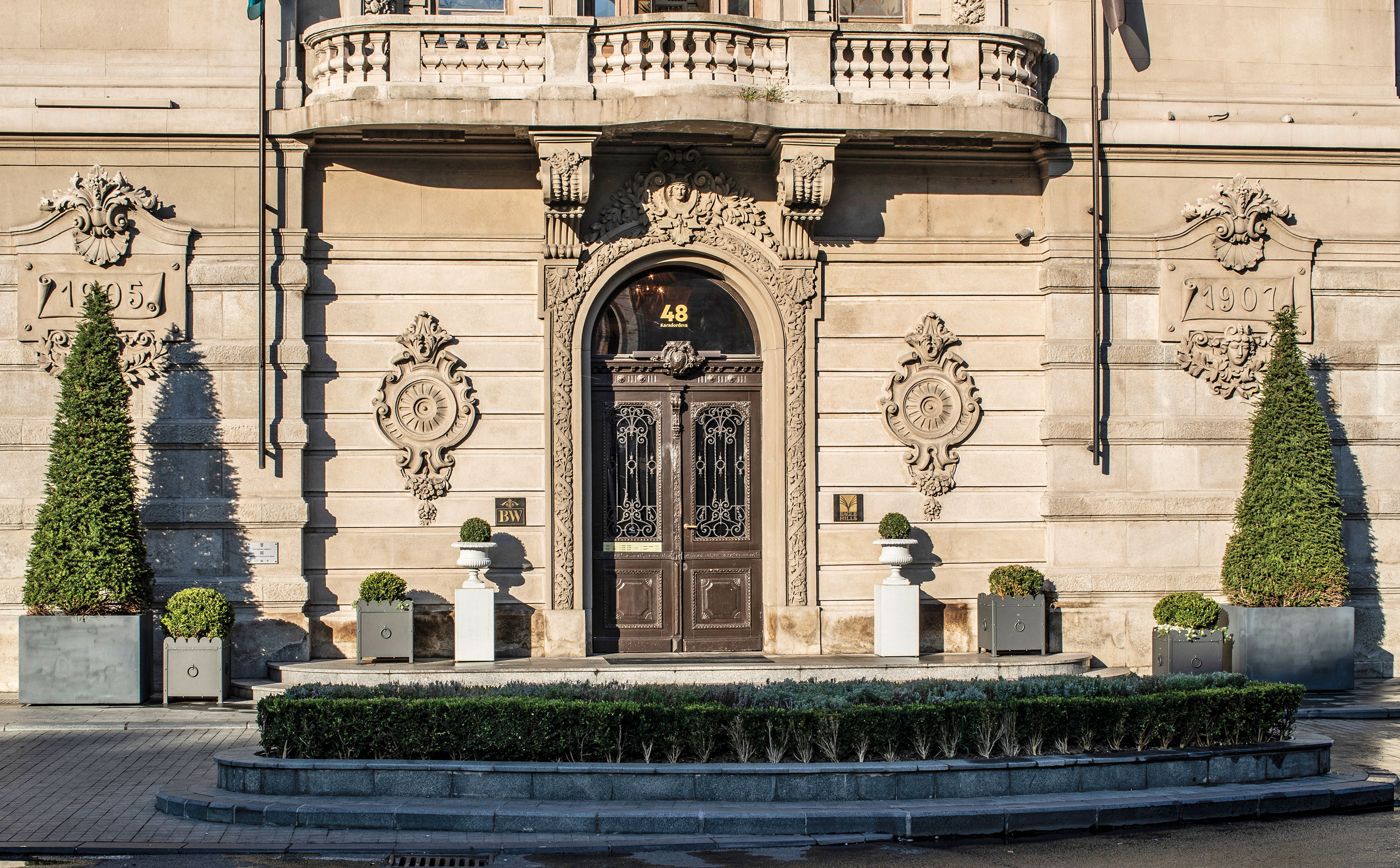 Belgrade’s Cooperative for Mutual Support and Savings was established in 1882 by a group of influential Belgrade merchants. The idea behind it was to provide financial support to the middle class, particularly craftsmen and small traders at the time when the Belgrade’s moneylanders charged a 50% interest rates on their loans. Throughout time, it expanded its activities to eventually become one of the major financial institutions in Serbia. In 1983, the head of the cooperative was Đorđe Vajfert, Serbia’s biggest industrialist. 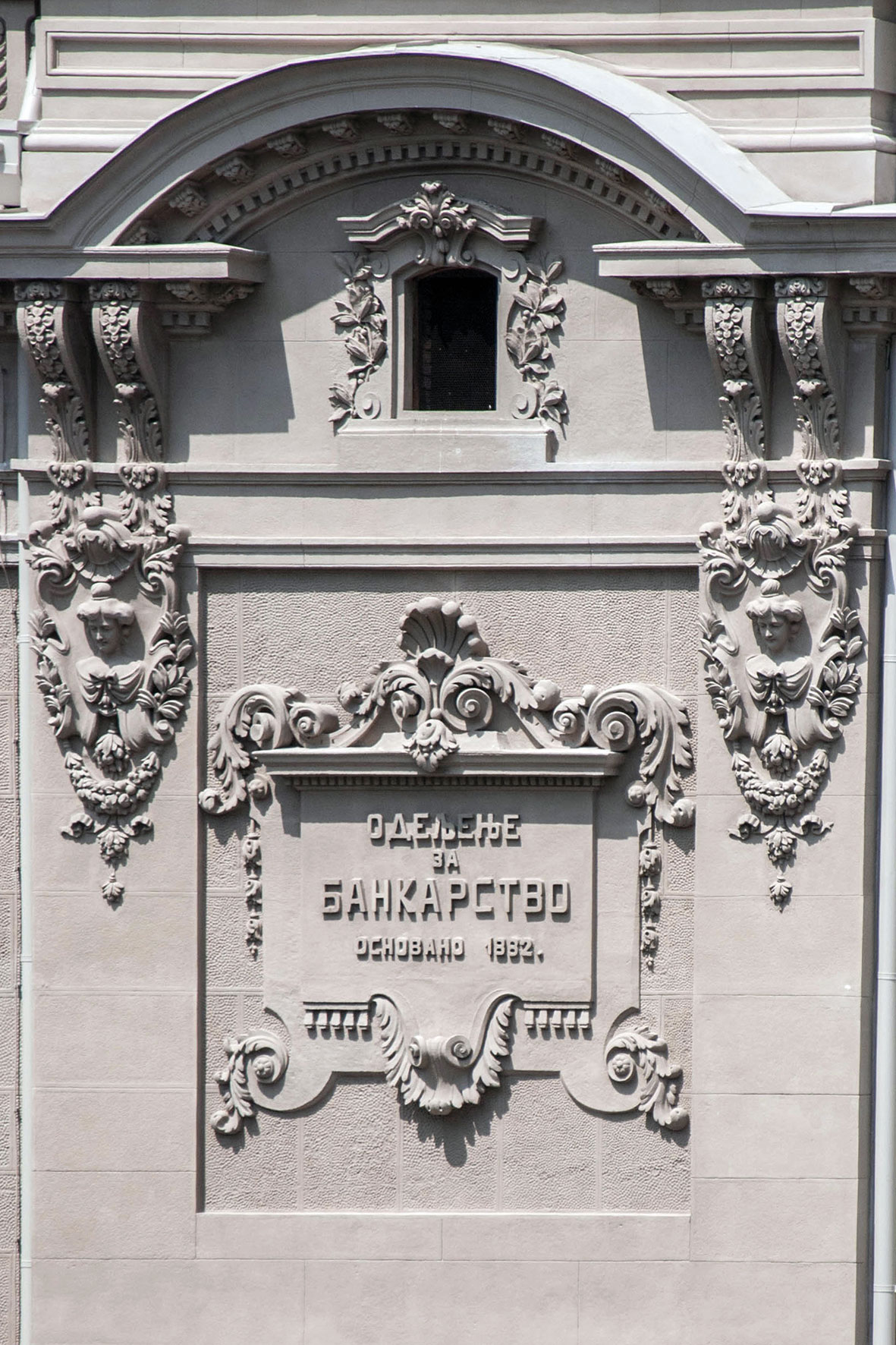 In 1890, Vajfert left the Cooperative to become the Governor of the National Bank and that same year, the Cooperative became a joint-stock company. Small and middle traders and craftsmen became the stock owners, which before that time was a privilege of rich clientele. Seven years later, the Cooperative established a Department for Life and Fire Insurance, actually the first insurance bureau in Serbia.

As the business activites expanded, the premises used by the Cooperative located on the ground floor of a building at the beginning of the Knez Mihajlova street, and later at the corner of Jakšićeva street and Obilićev venac, became insufficient. At the stock owners regular assembly in 1897, it was decided to erect a new building. The management of the Cooperative gave instructions to buy out the land from the local traders in the neighbourhood of the Small green market by the Sava river in order to construct a building in its upper area which would accommodate the Belgrade Cooperative’s main office. 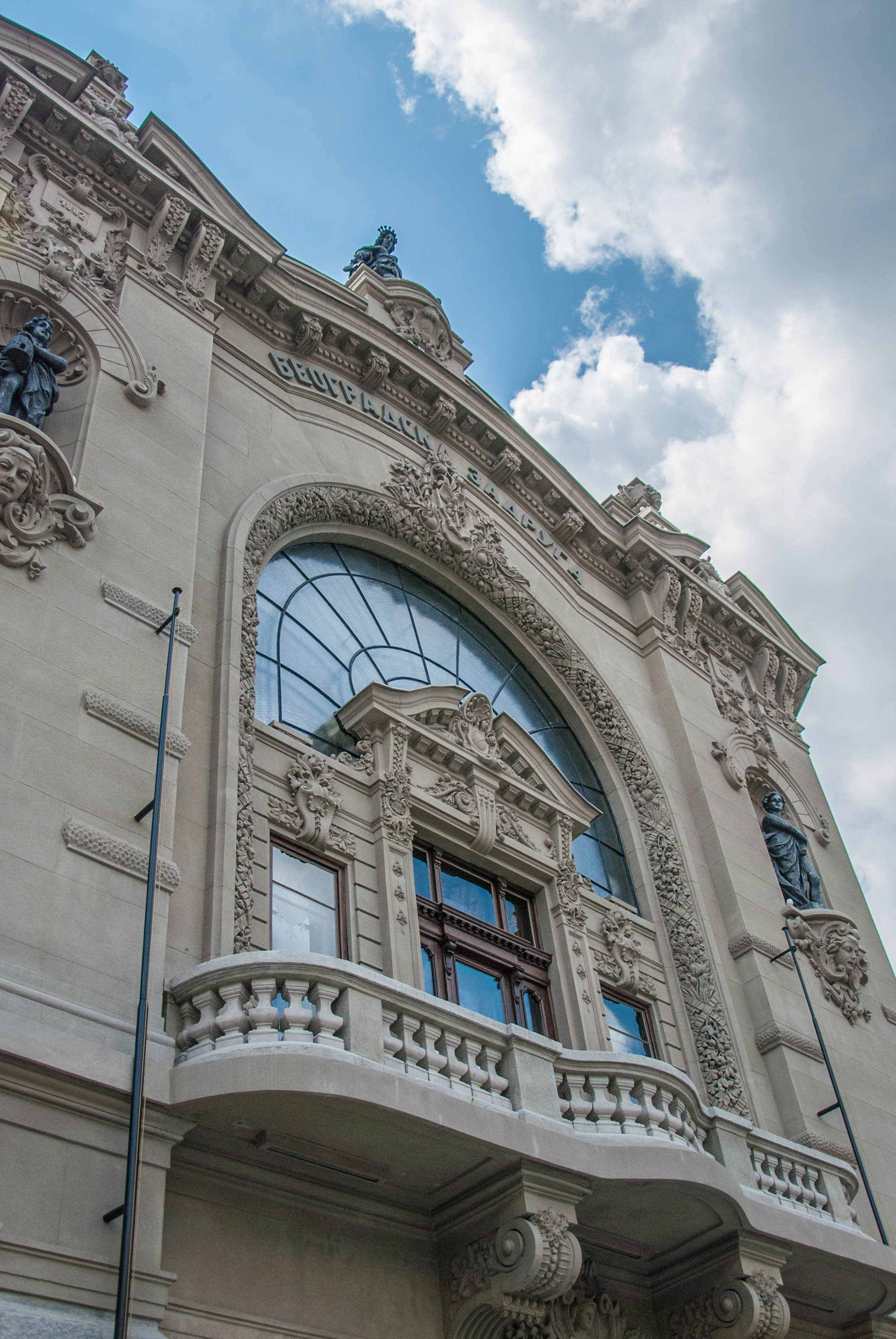 It would be unfair not to mention that the construction was mainly financed by Luka Ćelović Trebinjac, a rich merchant and an eminent endowment holder, a man who started as a simple shop owner to become one of the most prominent businessmen in the Kingdom of Serbia and also a man who even back then understood that Savamala was the most attractive city location. Luka Ćelović, wholesaler, rentier, major investor and a great Serbian benefactor, had a passion for erecting magnificent buildings all over Belgrade. He also held positions of the Banking department and Insurance department’s President, and it was due to his merits that the Cooperative was so successful. 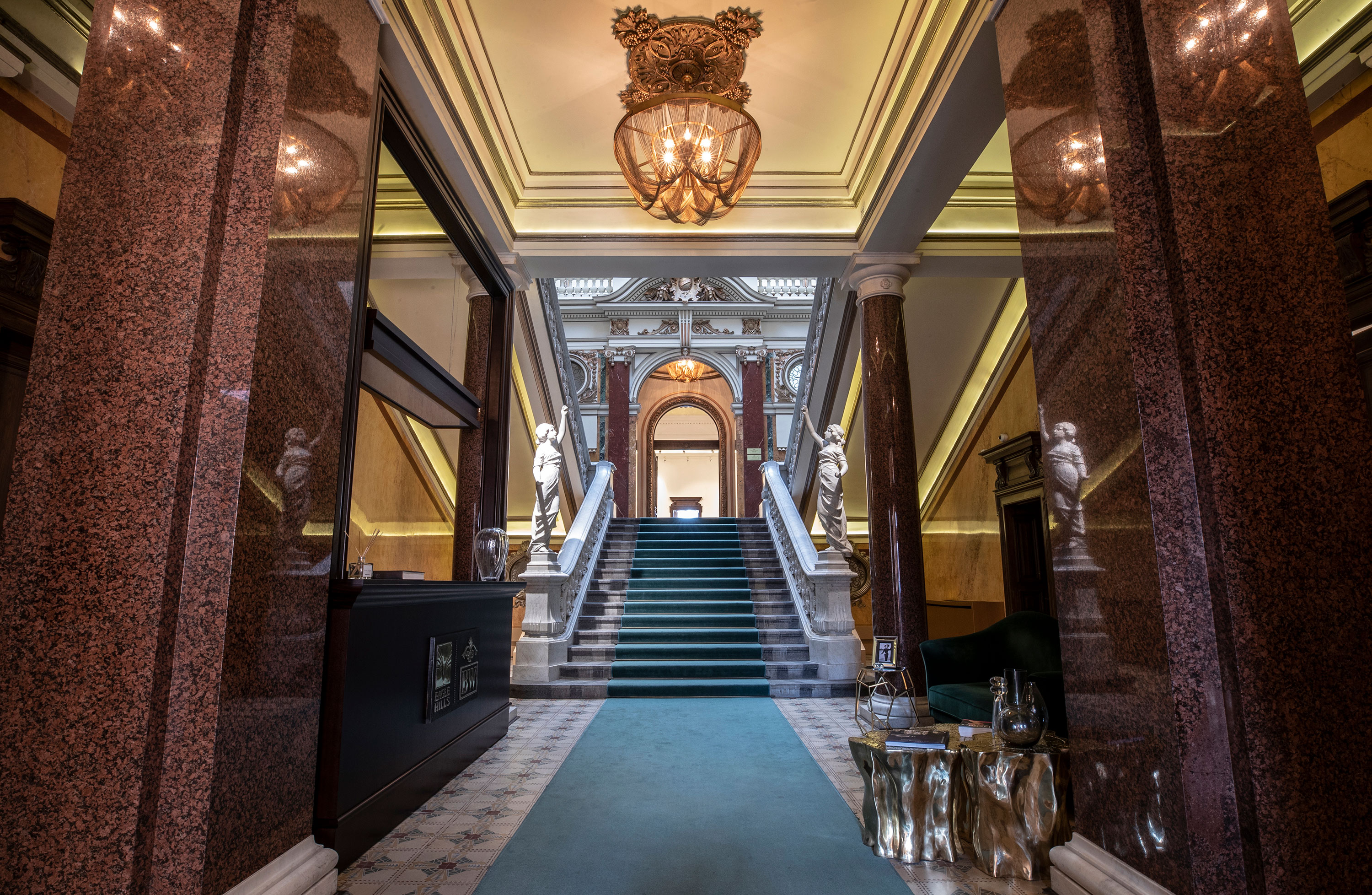 The construction of this impressive building at the location of the Small green market on the Sava embankment, began in 1905 and was completed in 1907. The building was constructed after the architectural design of two leading architects – University professors Andra Stevanović and Nikola Nestorović. Their design was largely influenced by the Paris 1900 exhibition which was dominated by the Paris school decorativism.

The social position of the Belgrade Cooperative dictated the only possible architectual concept – that of representativeness and monumentality, with its origins in eclectical academism as well as the contemporary secession architecture of that time. It was the first time that reinforced concrete was used in building, as the most up-to-date construction innovation, and the artificial stone was used for the facade. 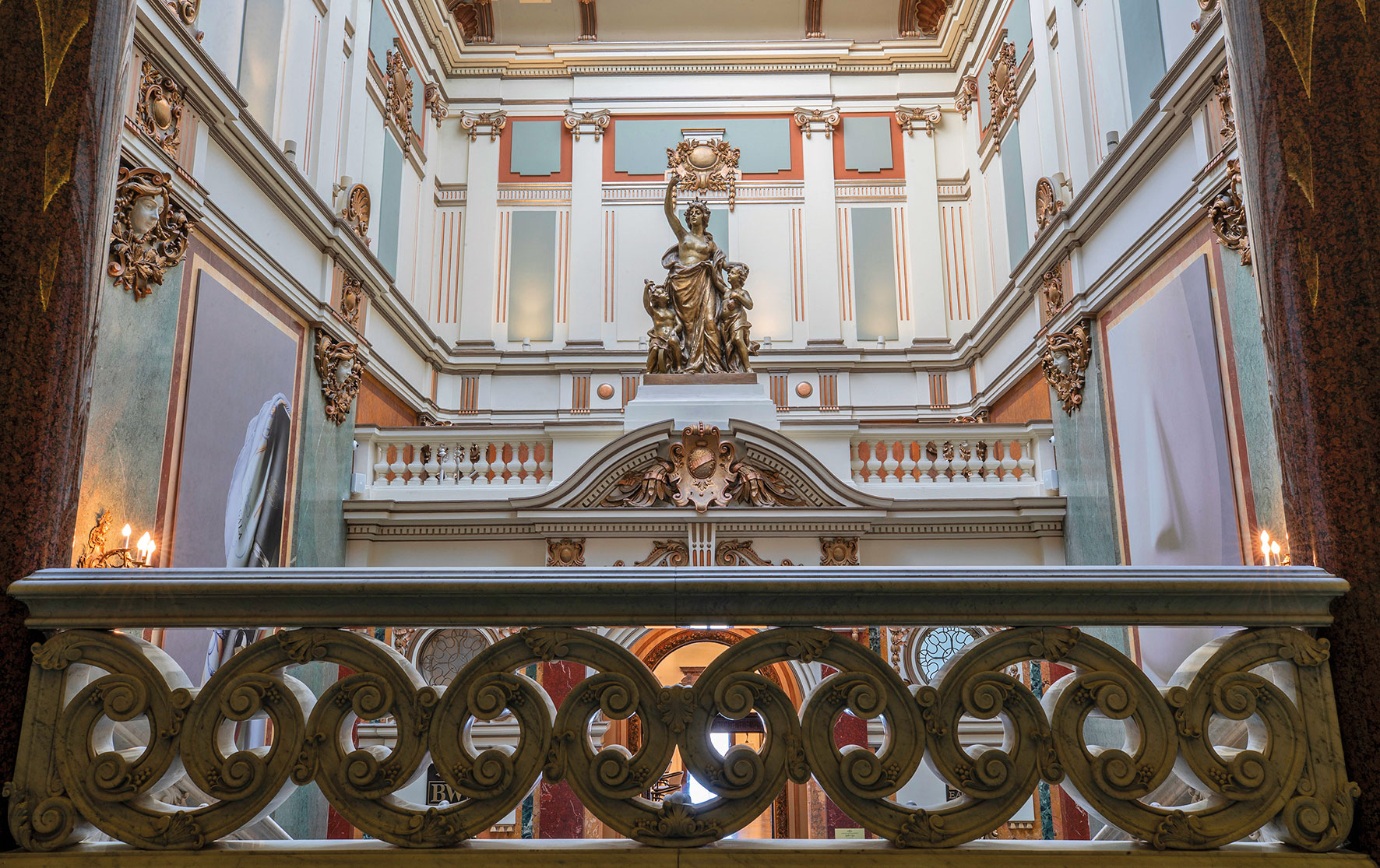 The central part of the building, emphasised by the large multifaceted dome faces the Karađorđeva street. The front side facing the street, has two levels – the entrance and the ceremonial hall. The central place is occupied by a vestibule extending through both floors, with a single-level counter hall in the rear. Both wings have a ground level and two additional floors. Shops were once situated on the ground floor, and business premises on the upper floors – bank offices in one wing and insurance bureau in the other. 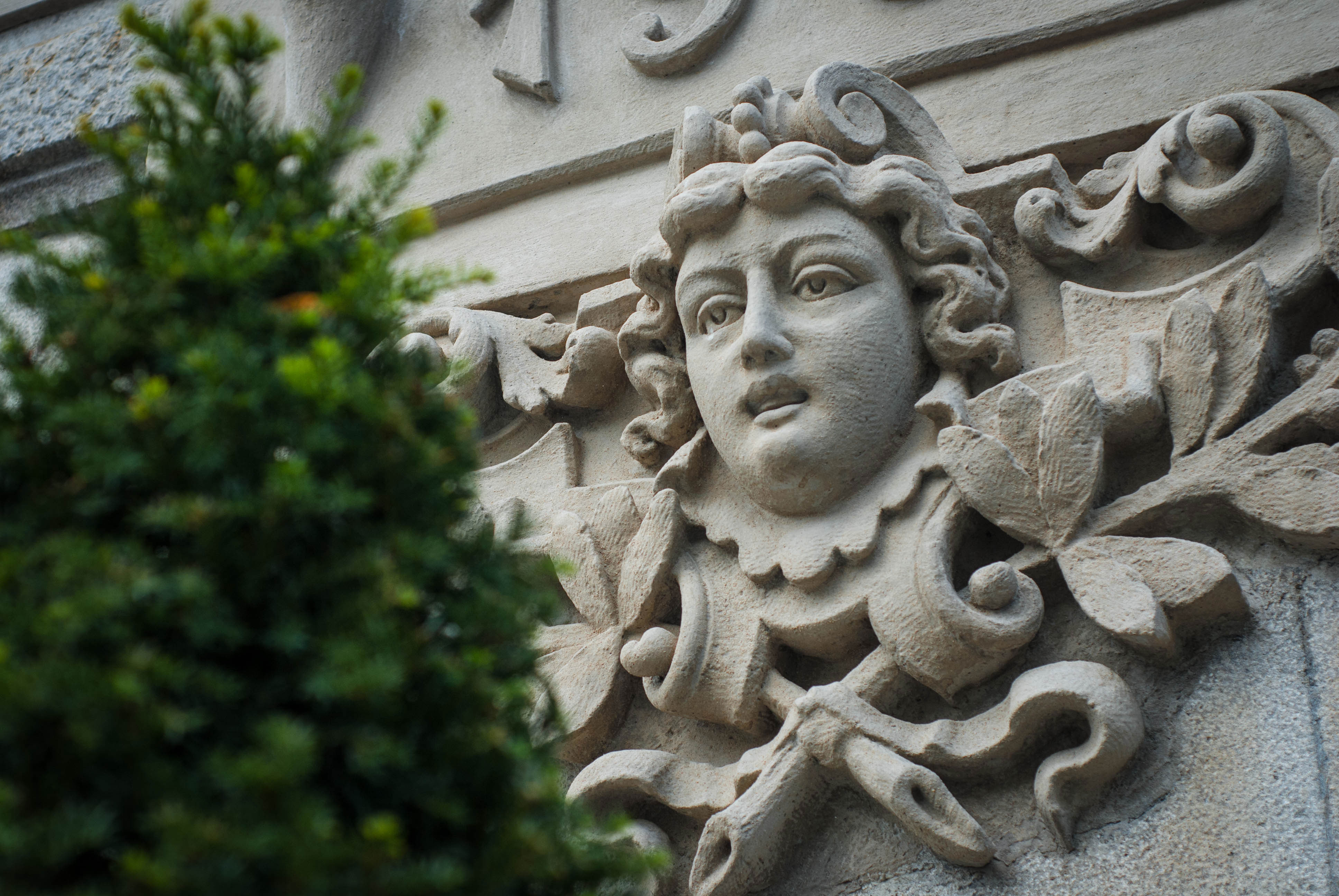 The facade is covered by various architectural and decorative motifs, such as pilasters, coronets, consoles, timpanons, friezes, cartouches and other detached decorative elements, as well as freely formed floral ornaments and figural sculptures. Motifs originate mostly from the baroque architecture repertoire but adapted to unique artistic flairs and individual interpretations of two notable architects – Nikola Nestorović and Andra Stevanović. Two large niches stand out on the central facade on the left and right side of a glass plane which conceals the great salon on the second floor. Placed in the niches are figures of a boy holding a scroll in his hand and a girl with an apiary, symbolising the activities of the Cooperative. Placed on the very top and just below the dome is a group of zinc made figures representing Serbia (a woman with a crown) and four sectors of industry that Cooperative dealt with (four children figures). 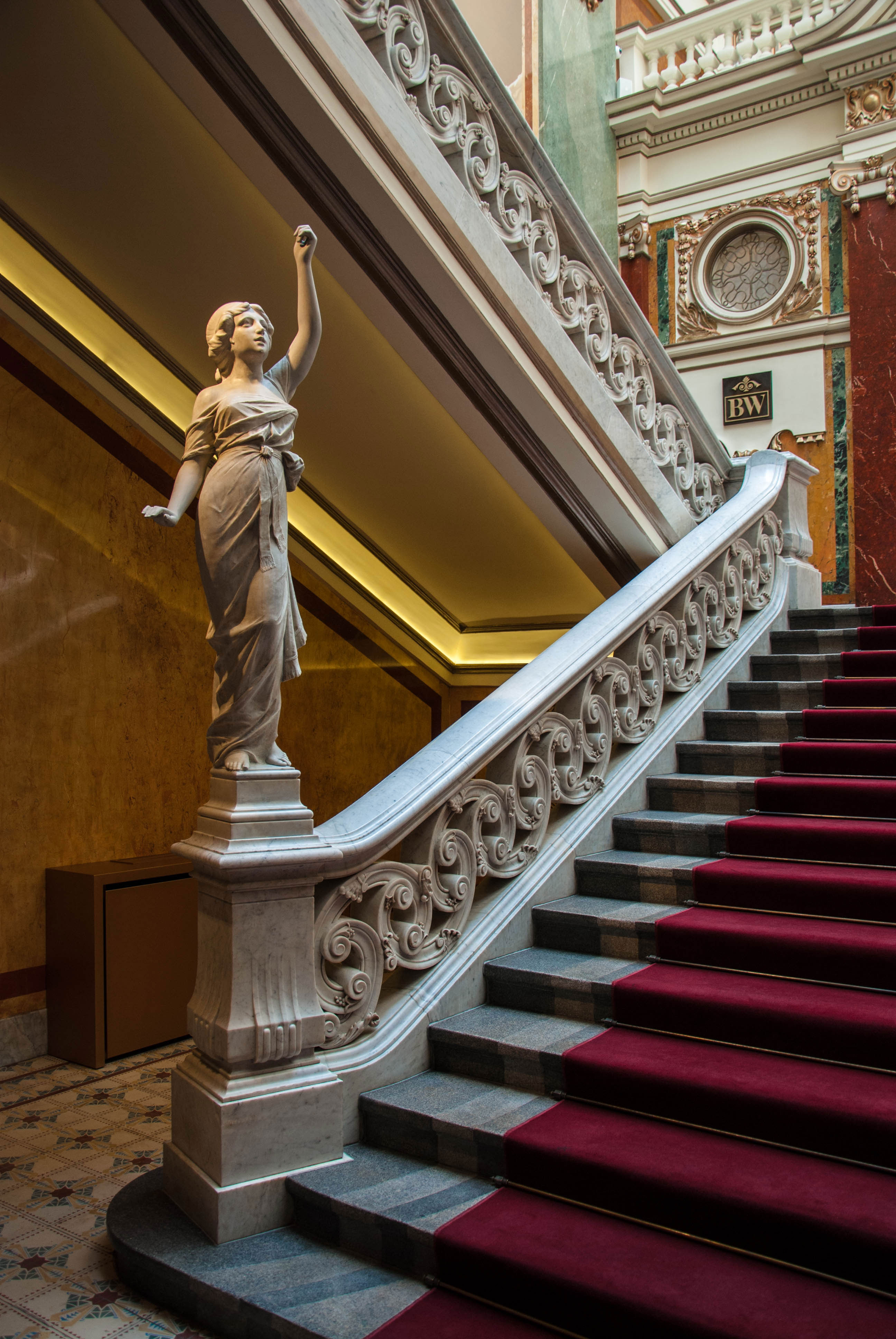 The interior of the building is among the most beautiful ones in Belgrade architecture.  At the beginning of the staircase there are two counterpart figures of a young woman in the form of a chandelier. In the main hall, above the gallery there is a figure of Aphrodite with two Cupids. The ceremonial hall occupying the central part of the first and the second floor is particularly impressive. Marble was used for decoration and there are some striking gold plated reliefs in the form of female masks and plants. The large glass plane on the building’s front side is actually the window of the Ceremonial hall with a door leading to a small balcony. The floors are covered with parquet or terrazzo tiles. 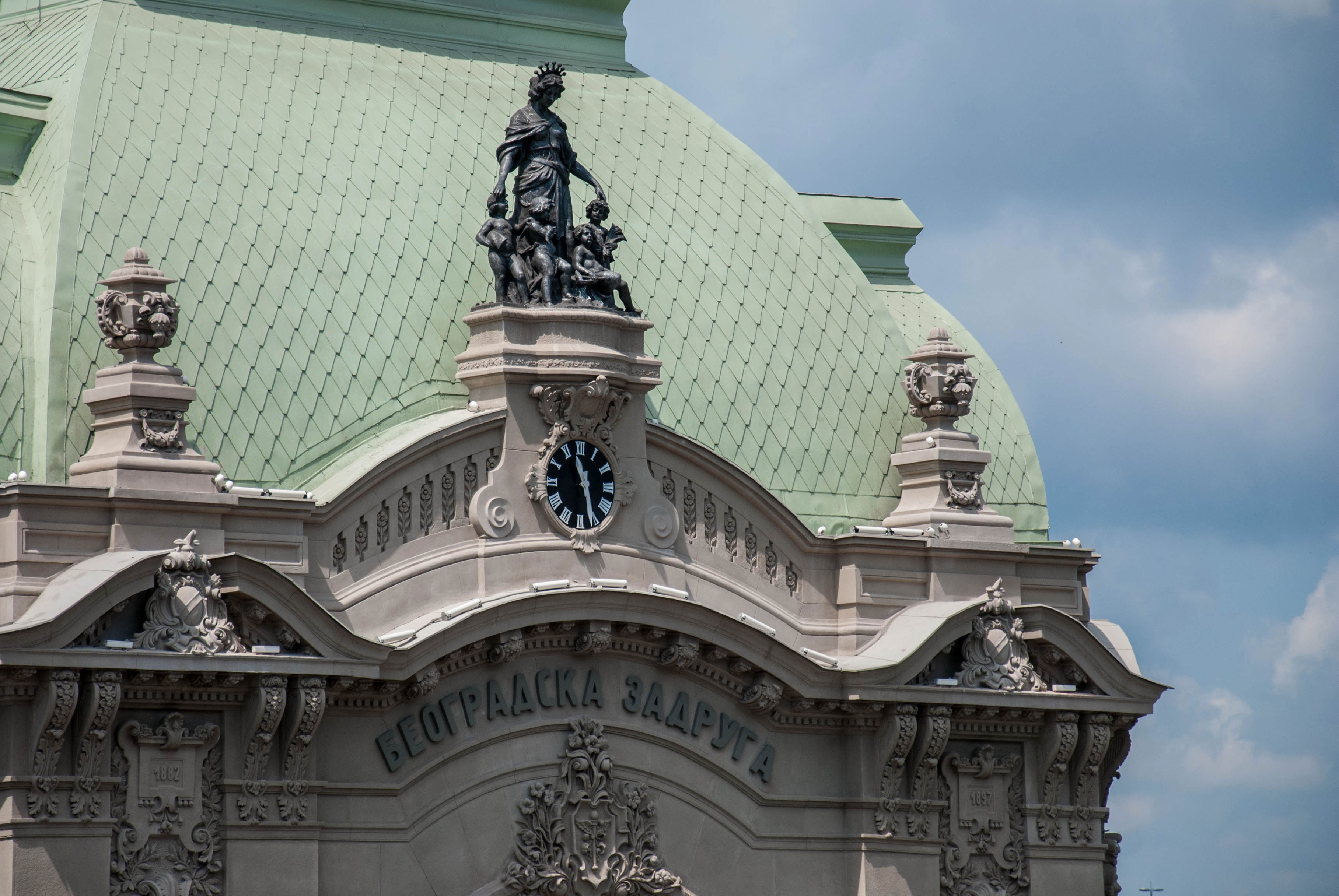 Facade ornaments and interior decoration and stucco ornamentation on the walls and ceilings were done by Franjo Valdman, the sculptor of building ornaments. Decorative paintings were done by Bora Kovačević and Andreja Domeniko and paintings on the glass are work of R. Marković. 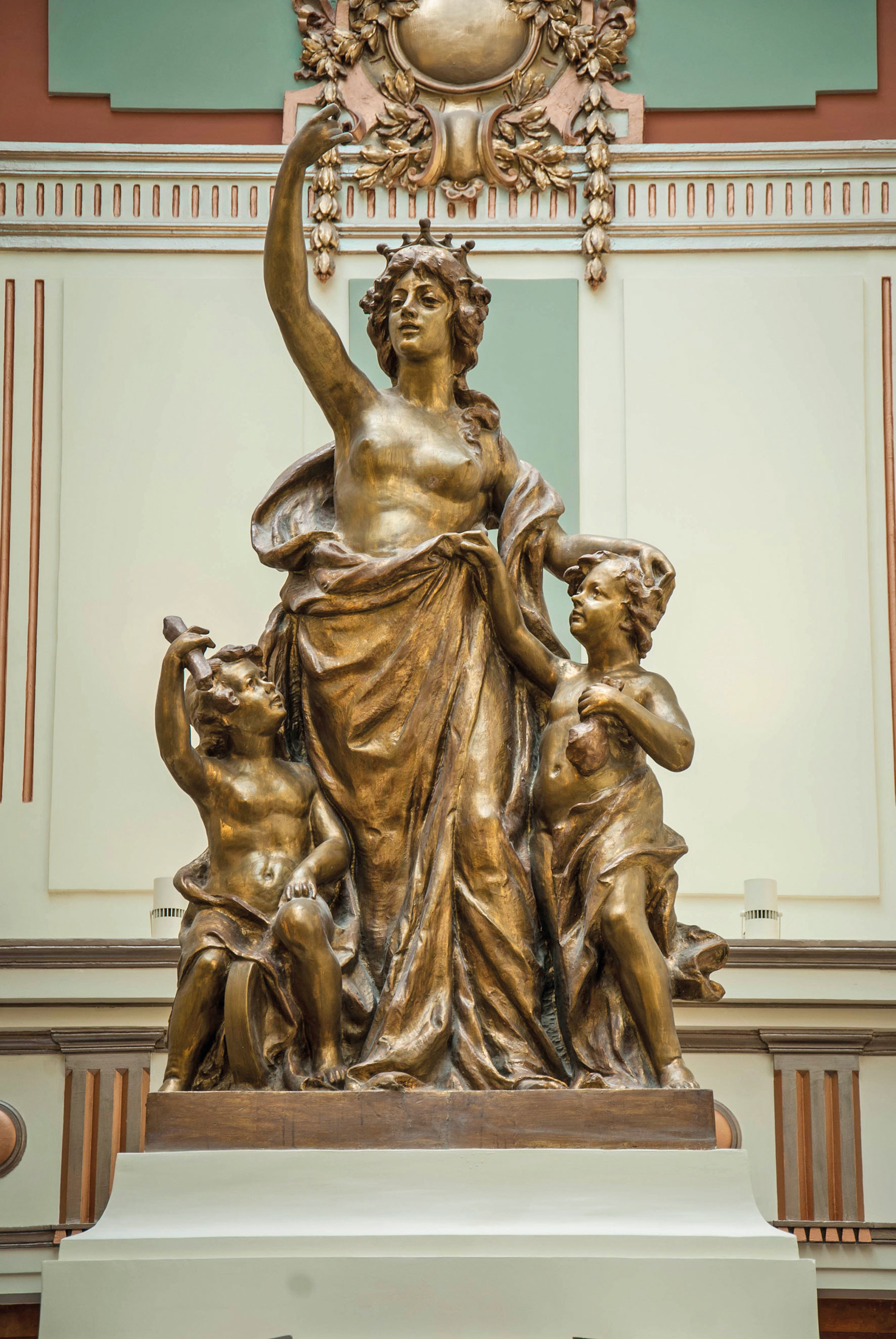 The Belgrade Cooperative moved into the building right after the completion of the building in 1907 and remained there until 1944 when it ceased to exist. After the war the grandiose building was used by a number of different organisations which gradually changed its exterior and interior appearance. For the longest period of time it was used by the Geological-Geophysical Institute „Jovan Žujović“, which is why the building is still widely known as the Geoinstitute building. During this rental period, a third floor was added on the side wings of the building and an additional part was built above the counter hall. 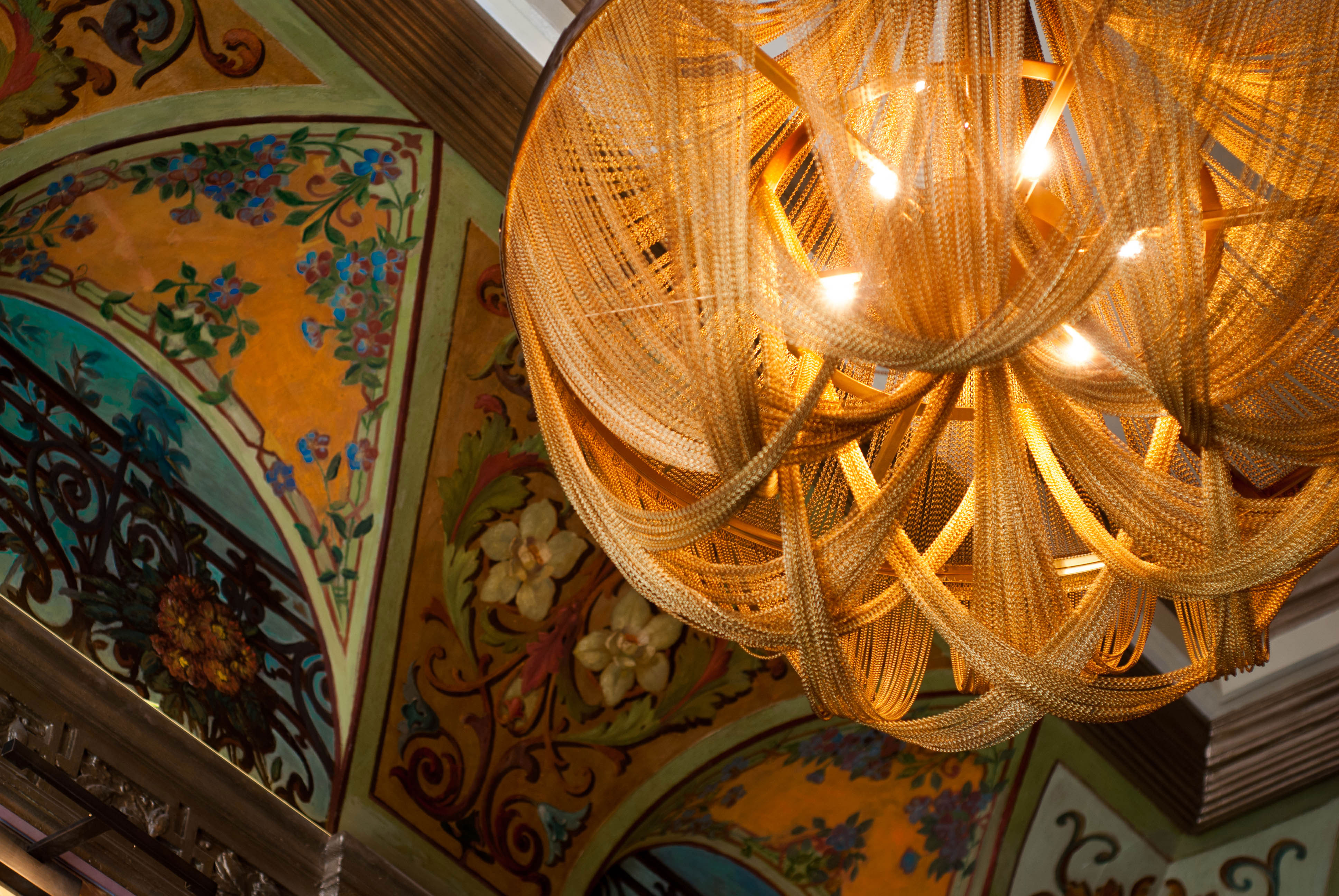 The building was renovated several times in its history. The most important changes in the construction and architectural structure were made in 1956-57 and 1958-59. The latest reconstruction of this Belgrade’s palace which restored some of its old splendour was carried out by the Belgrade Waterfront investors in 2014 when it was given for use to this company. During the three months long reconstructions, the building’s facade was completely renovated, as well as the 4,000 square meters of its interior, after which the building was once again open for public in June 2014. 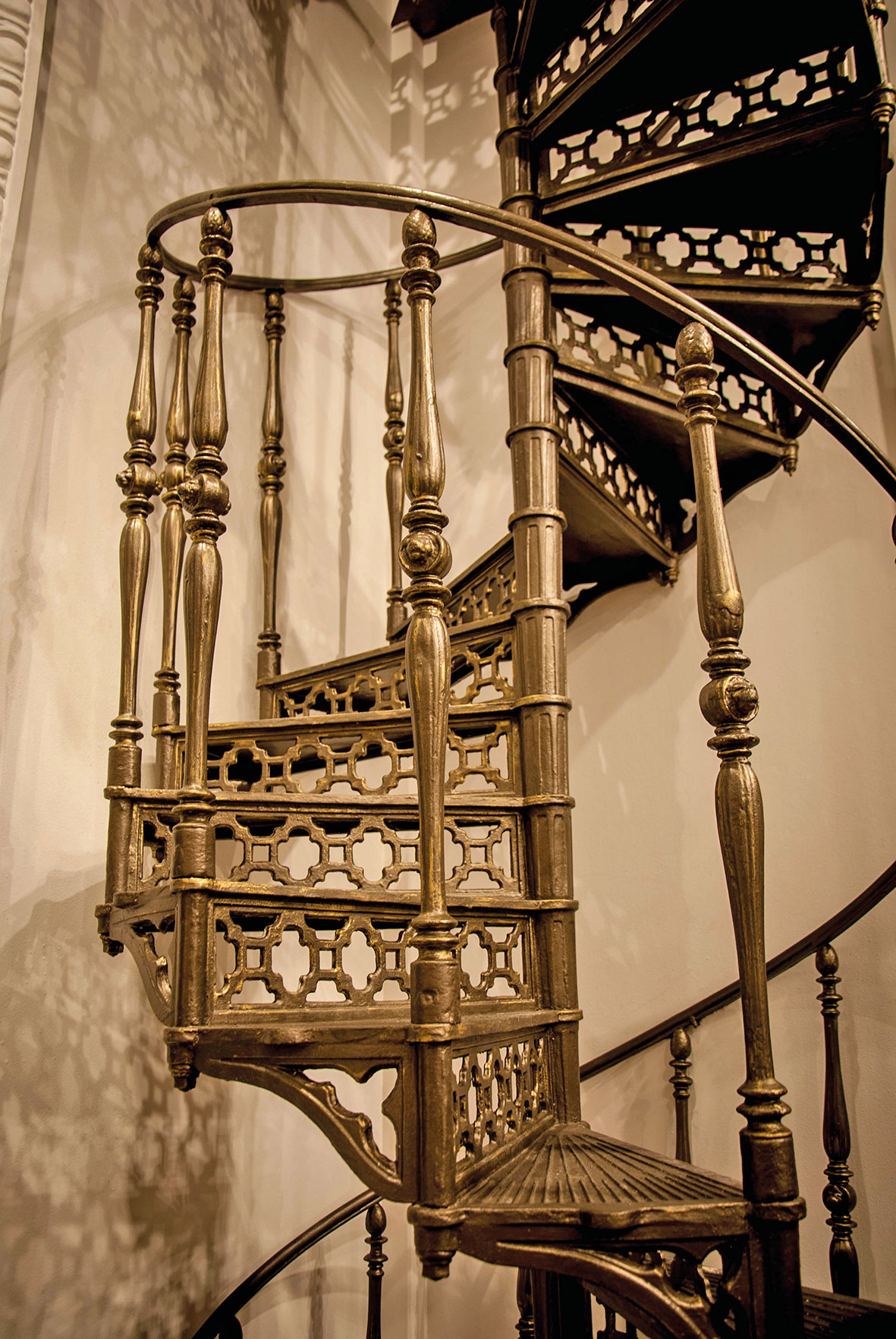 Today the Belgrade Waterfront premises and the sales centre are located in the building. Thanks to the cutting edge technologies in real estate, visitors are given the opportunity to have an experience of living in Belgrade Waterfront. Virtual realty enables them to walk through their future apartment, take a look at the premises and enjoy the view from their terrace. Monitors placed in the main hall are showing the masterplan from different angles, trafic regulation within the project, and even such details as the motion of the sun, giving the potential buyers the opportunity to take into consideration changes of the angle at which the light and shadows move when picking the building. By simply touching the screen, they can choose the building, size and the structure of the apartment and the floor where they want to live and subsequently receive the information on their future home.

Large touch screen wall monitors are placed in the former counter hall, as well as the replicas of the Gallery and the Belgrade Tower. Old safe and the spiral staircase were kept intact and present a real attraction for visitors. This hall serves as the site for a range of daily activities – from organized and individual visits to business meetings. 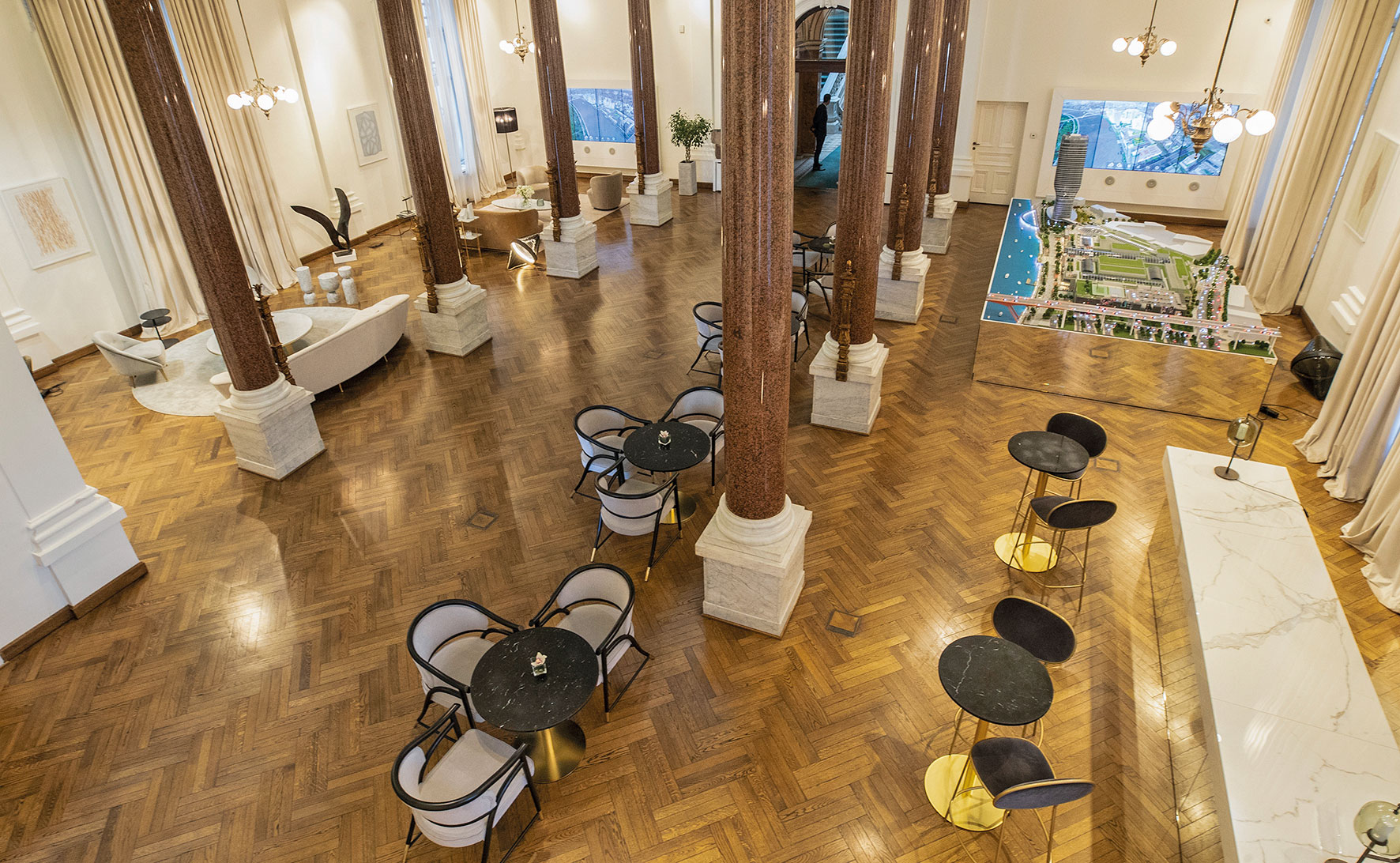 Restaurant Salon 1905 occupies the former ceremonial hall, and offices are situated in the left and right wing. Apart from an exclusive beverage and gastronomic offer, Salon 1905 provides its customers with an impressive ambiance dominated by marble walls and columns, gold plated relief works, and the large glass front side. Recently, Salon 1905 was awarded a Michelin star. 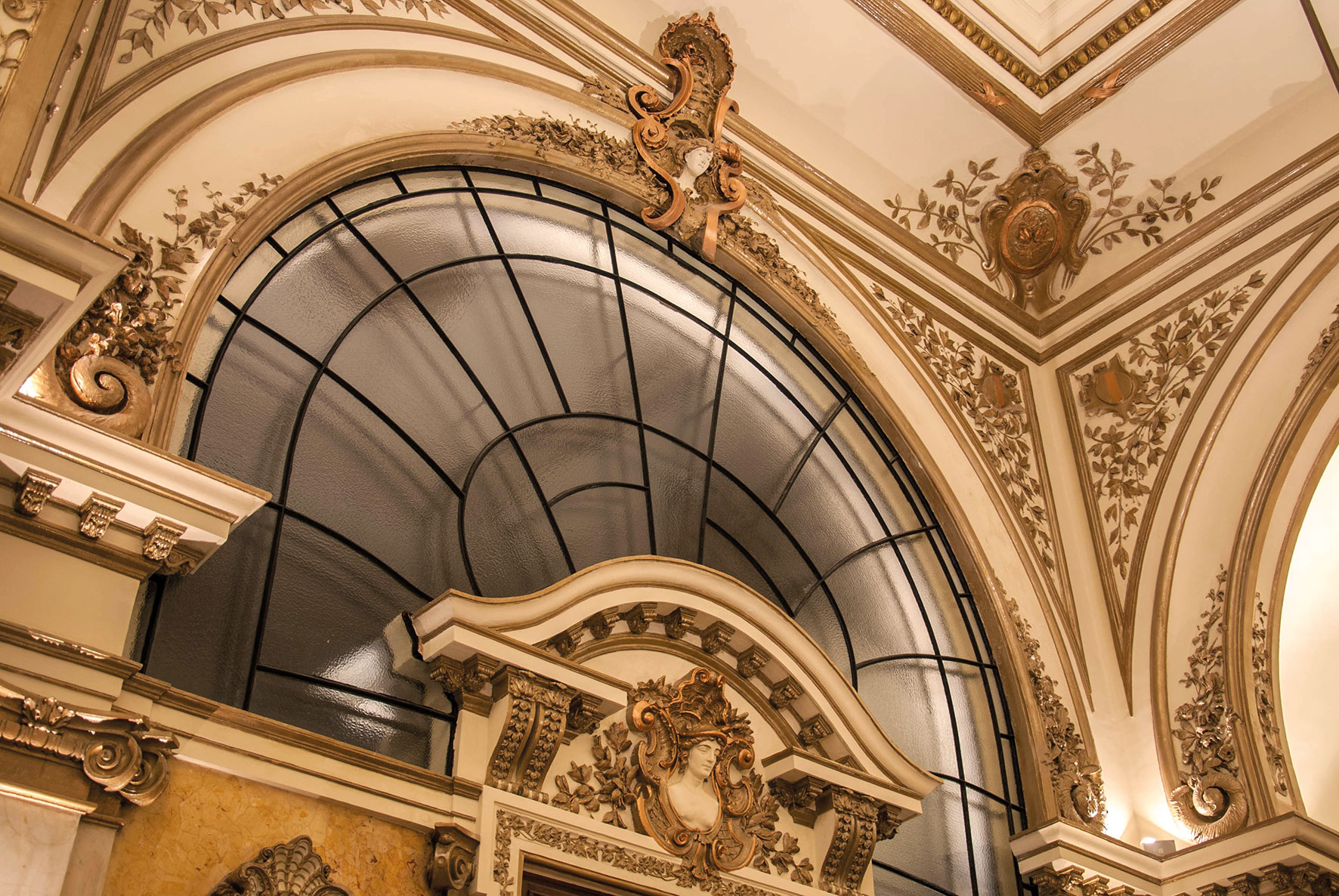 The building is open for visitors from 8 am to 10 pm on workdays and 12 pm to 22 pm on weekends. Group visits should be announced in advance.